Shi Cong helped onto the all-around podium following his injuryThe second day of all-around and team competition for the men ended as expected for.. 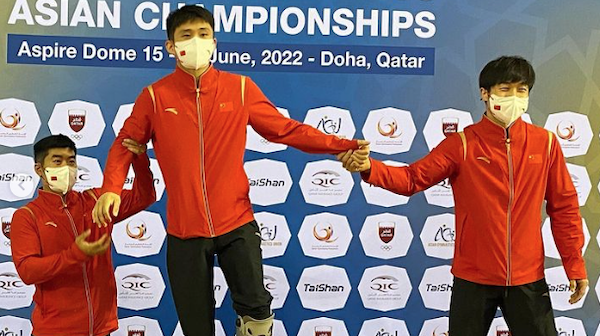 Shi Cong helped onto the all-around podium following his injury

The second day of all-around and team competition for the men ended as expected for China, which took the gold nearly six points ahead of Japan, but it wasn’t without drama, as all-around champion Shi Cong suffered an injury on his final event, vault.

Shi came into the final rotation looking pretty sure to take the gold after putting up the second-best parallel bars score and the top high bar score of the competition on Thursday. The fall on vault was disappointing, and the injury was even more unfortunate, but in the end, he still wound up less than a tenth ahead of the rest of the field to get the win with an 83.833.

This was also exactly a tenth ahead of teammate Yang Jiaxing, who won the bronze with an 83.733 after putting up an especially strong performance on high bar (14.0), while Yin Dehang ended up with an 83.199, just out of the all-around rankings due to the two-per-country limitations, though with Shi’s injury, he was able to make it into the p-bars final with a 14.833.

Also on the roster and winning gold for China were Lin Chaopan, who had a strong second day of competition to finish first on p-bars and fifth on high bar, and Lan Xingyu, who contributed a strong score on vault after leading rings qualifications a day earlier.

After falling short on day one, the Japanese men climbed ahead of Taiwan thanks to a superb p-bars rotation to narrowly take the silver medal with a 249.500, less than three tenths ahead of Taiwan’s 249.211, which was good for bronze.

The top all-arounders for Japan were Maeda Koki in fifth with an 82.932 and Tachibana Shiga in ninth with an 81.800, while Hasegawa Tsuyoshi just missed the all-around standings with an 81.535, though he did earn spots in the p-bars and high bar finals. Maeda also made it in on p-bars, Tachibana qualified second on vault, and Hidaka Daiki got in on high bar. Yuasa Kenya, meanwhile, didn’t compete on day two, with rings his only event.

Tang Chia-Hung continued to nail his competition on Thursday after an equally strong day one, and he came just a tenth shy of making the all-around podium, finishing fourth with an 83.600 and qualifying into the high bar final. Low difficulty on high bar held Lee Chih-Kai back to eight place in the all-around with an 82.000, and Lin Guan-Yi also competed all events for Taiwan, earning an 80.635 total. Hung Yuan-Hsi competed both p-bars and high bar, qualifying to the final on the former, while Tseng Wei-Sheng competed only on vault, adding that final to Taiwan’s collection.

The other two countries that qualified full teams to world championships were South Korea in fourth with a 428.267 and Kazakhstan in fifth with a 241.868. Things looked like they could be close between Kazakhstan and Uzbekistan after the first day of competition, but Kazakhstan ended up 5.6 points ahead of Uzbekistan’s 236.268, besting the team by at least a point on all three events contested on Thursday.

Ryu Sunghyun and Lee Junghyo were South Korea’s standouts, finishing sixth and seventh all-around with scores of 82.034 and 82.000, respectively, with Lee qualifying into the p-bars final and Ryu into high bar alongside Yun Jinseong, who competed well across his three events on Thursday, while Kim Hansol made the vault final.

For Kazakhstan, Milad Karimi came back from a disappointing first day of competition – where he missed the floor final and had a rough go on pommel horse – to show excellent work across the board, making the vault, p-bars, and high bar finals while also ending up 10th all-around with an 80.700. Ilyas Azizov was 11th all-around with a 78.368, and Dmitriy Patanin qualified to the vault final.

Carlos Yulo of the Philippines, who had a slight lead in the all-around competition after the first day, ended up very close to gold, but a weak high bar routine ultimately held him back to the silver medal with an 83.767. He performed phenomenally on both vault and p-bars, though, qualifying first into the vault final with a 14.917 average and sixth into p-bars with a 14.367.

The biggest surprise for me was 2020 Olympian Rasuljon Abdurakhimov of Uzbekistan not earning a spot, falling behind his two teammates after a rough pommels routine on day one. He could be on the bubble for making it to Liverpool via the parallel bars world cup rankings, where he’s currently 16th, though the majority of those ahead of him are going to qualify through continental championships. Of course, this would mean he’d only be able to compete on this event, but it’s better than not making it at all!

Countries not earning spots here include Hong Kong, Jordan, Kyrgyzstan, Mongolia, Qatar, Saudi Arabia, Singapore, Syria, and Thailand. Among these, Hong Kong and Jordan should both still have representation at worlds, as Shek Wai Hung of Hong Kong is currently ranked seventh on vault while Ahmad Abu Al Soud of Jordan is ranked seventh on pommel horse, but it’s a bummer to see several of the others missing out completely.

Though Vietnam missed out on Asian Championships after reportedly not knowing it was a worlds qualifier, Nguyen Van Khanh Phong is ranked 16th on rings via the world cups and will likely get in. It’s still super depressing that neither Le Thanh Tung and Dinh Phuong Thanh – who won the silver and bronze all-around medals at last month’s Southeast Asian Games – will be able to compete.

Malaysia has Tan Fu Jie likely to qualify via pommel horse and Muhammad Sharul Aimy in a great spot to get in on vault, and though they do have some all-arounders who performed well at the Southeast Asian Games, I’m not sure they would have challenged any of the all-arounders who qualified here. The rest of the countries on the list, however, will not have any MAG representation at world championships, and with the exception of North Korea – which is still on lockdown due to the COVID-19 pandemic – I don’t believe any would have qualified to worlds regardless.

Read More
Did you miss our previous article...
https://ballerawards.news/sports/tappy-to-replace-hanson-in-united-lineup-for-12h-sebring
aswellfinalevent