Gerard Butler walks back to the beach in his wetsuit after catching some waves on Thursday (July 8) in Malibu, Calif.The 51-year-old actor was.. 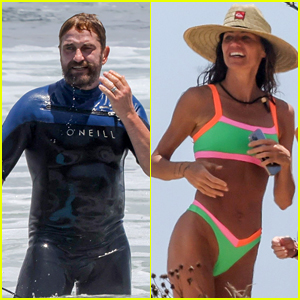 Gerard Butler walks back to the beach in his wetsuit after catching some waves on Thursday (July 8) in Malibu, Calif.

The 51-year-old actor was spotted having a beach day with his longtime love Morgan Brown and some friends.

PHOTOS: Check out the latest pics of Gerard Butler

There has been some big news for Gerard this week!

Click inside to learn more about what’s going on…

It was just announced that Gerard has wrapped filming on the upcoming action-thriller Chase, which will be released by Voltage Pictures, according to Variety.

Gerard stars in the movie alongside Jaimie Alexander, Russell Hornsby, and Ethan Embry. The movie “centers on Will Spann (Butler), who is driving his soon-to-be ex-wife Lisa (Alexander) to her parents’ home when she mysteriously disappears without a trace during a stop at a gas station. A frantic Will engages the local police and Lisa’s parents in a desperate attempt to find her, but as time passes and suspicion falls on him, he must take matters into his own hands, delving into the town’s criminal underbelly while running from the authorities in a race against time to find Lisa.”

It was also just announced that Gerard‘s upcoming Greenland sequel has sold to STX as part of a $75 million deal, according to Deadline.