Ronaldo In Tears After What Could Be His Final World Cup

DOHA, Qatar — After the final whistle, after Morocco had upset Portugal, 1-0, on Saturday to become the first African country in World Cup history to .. 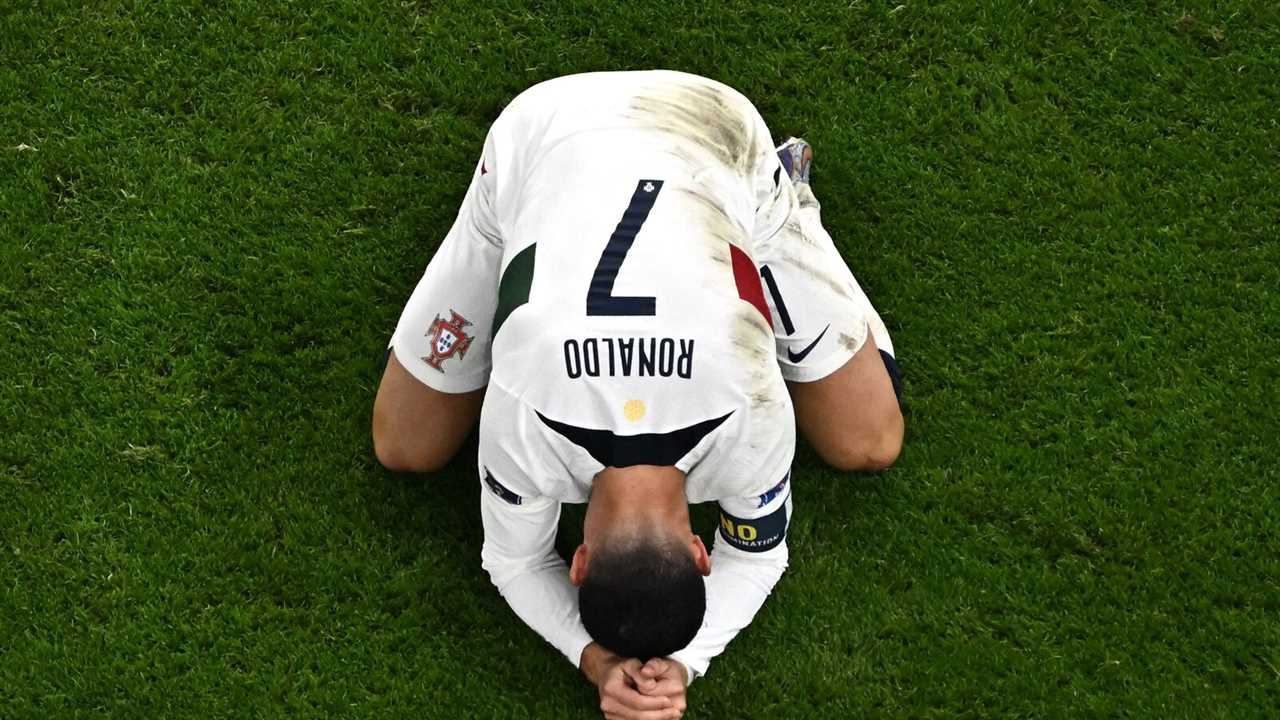 DOHA, Qatar — After the final whistle, after Morocco had upset Portugal, 1-0, on Saturday to become the first African country in World Cup history to reach the semifinals, Cristiano Ronaldo put his head down and started the long walk to the tunnel at Al Thumama Stadium.

Two Moroccan players came over to say goodbye and Ronaldo, the Portuguese superstar in the twilight of his career, briefly obliged but barely broke his stride. As Morocco and its fans celebrated with glee and Portugal’s players stood around in shock, Ronaldo, 37, exited what he has said could well be his final World Cup.

In the tunnel, television cameras showed Ronaldo — one of the most decorated players to never have won a World Cup and who had been reduced to a substitute player of late — wiping tears from his eyes. If this was indeed it for one of the greatest players of all time, it ended in disappointment for him and a team that some believed could have made a deeper run in the tournament.

“If we take two people that were the most upset about the game, perhaps it was Cristiano Ronaldo and myself,” Portugal Coach Fernando Santos said through an interpreter.

This World Cup was supposed to be a final hurrah on this stage for veteran stars like Ronaldo, Lionel Messi of Argentina and Luka Modric of Croatia. But only one team can win the title, and Messi and Modric remain important contributors on their teams, still alive in the tournament. But recently Ronaldo, the team’s captain, ended up watching from the sidelines more than he played.

Benched in back to back knockout stage games by Santos, Ronaldo, a five-time Ballon d’Or winner, performed little like the dazzling player who had scored 118 times in 196 career appearances for his national team. With a penalty against Ghana in the group stage, Ronaldo became the first male player in history to score at five World Cups.

But that goal was Ronaldo’s only one in this tournament and perhaps the final one of his World Cup career. In all, he has scored eight goals in 22 World Cup games, the fifth most of all time. His best finish in the World Cup was in his first, in 2006, when he was 21 and Portugal finished fourth.

This World Cup has been much tougher for Ronaldo. While in Qatar, he parted ways “by mutual agreement” with his club team, Manchester United, a week after he criticized management in an interview and charged the club with betraying him.

During the first two games of the World Cup group stage, Ronaldo started and was removed late for a substitute. But during a 2-1 loss to South Korea in Portugal’s third and final group-stage game, Santos replaced Ronaldo much sooner, in the 65th minute. Ronaldo did not take this well, responding by raising a finger to his lips, as if gesturing for quiet.

In the next game, a round of 16 matchup with Switzerland, Santos benched Ronaldo and explained it was because he was frustrated with his player’s attitude in the previous game. Santos later said that Ronaldo was not happy when told of his benching but that he had never threated to leave the team.

It didn’t help Ronaldo’s cause that his replacement against Switzerland, 21-year old Gonçalo Ramos, dazzled with a hat trick and led Portugal to a 6-1 win. So against Morocco, Santos stuck with what worked and had Ronaldo on the bench again while Ramos started.

After Saturday’s loss, Santos said he had no regrets. He continued, “This was a team that played very well against Switzerland. Cristiano is a great player and he came in when we thought it was necessary.”

Against Morocco’s defense, Ramos didn’t wow again and was replaced by Rafael Leão in the 69th minute. Ronaldo entered the quarterfinal game in the 51st minute and tried to contribute with runs or passes or shots — Morocco goalkeeper Yassine Bounou, known as Bono, stopped one in the first minute of stoppage time — but he mostly looked like an aging player against a stout defense.

“I do not think that what happened to Cristiano Ronaldo and all the criticism that he faced had any impact on the match today,” said Santos, who faulted the team’s many missed opportunities. “We have always been a team that is very united.”

When asked if this was Ronaldo’s final game for Portugal, defender Pepe, 39, a longtime teammate, said that “now is not the time” to discuss this. (Ronaldo has said he planned to play at least at the 2024 European Championship before retiring from the national team.)

Pepe continued, “It’s an important moment for us. It’s important to talk about Portugal and we’re sad about not winning and not making our fans happy. We have to look at we did well and did poorly.”