Christina Aguilera Transitions From Red Carpet to Stage at Latin Grammys 2022, Where She Is Nominated & Performing

Christina Aguilera‘s making her presence known at the 2022 Latin Grammy Awards. The 41-year-old Liberation star showed up for the awards show at the.. 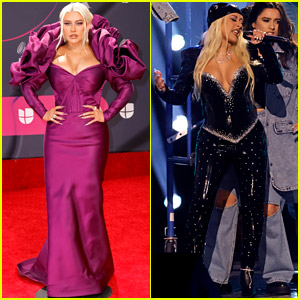 The 41-year-old Liberation star showed up for the awards show at the Michelob ULTRA Arena on Thursday evening (November 17) in Las Vegas, Nev.

She was joined by longtime partner Matthew Rutler on the red carpet, where she wore a majestic purple gown dress with dramatic shoulders.

After the show started, Christina hit the stage for a performance of “Cuando Me De la Gana” with Christian Nodal. The track appears on her Spanish-language album AGUILERA, which arrived earlier this year.

Christina went into the show nominated for multiple awards. She’s up for Record of the Year and Song of the Year for “Pas Mis Muchachas,” her collaboration with Becky G, Nicki Nicole and Nathy Pelusa. AGUILERA is also nominated for Album of the Year.

Did you see that Christina recently announced a very exciting project?

Read More
Did you miss our previous article...
https://ballerawards.news/gossip/twinning-kelsea-ballerini-mackenzie-porter-wear-same-dress-to-cmas-2022
latingrammytheawards